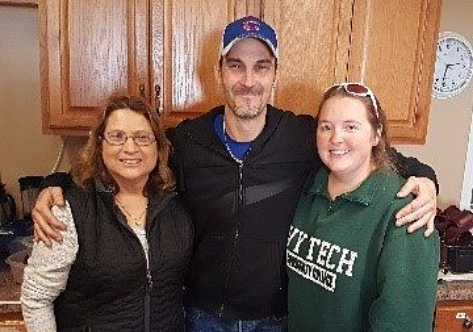 In 2011, Tim Martin walked thru the doors of Ottawa Pads for the first of many, many times.  A clean-cut guy with Tourette’s and non-productive habits, Tim was prone to severe anxiety, self-medicating and was short the necessary life skills to keep him employed, out of trouble and unfortunately, chronically homeless.   What Tim found at Ottawa Pads was the structure, hand up and caring to fall back on in those years.  Program Manager Marissa Melau and Executive Director Carol Alcorn describe their years with Tim as volatile, yet they stayed firm, held him accountable for his actions and believed in him to make the right choices.

Two years ago, Tim returned a changed man. After two divorces, tired of partying, couch surfing and staying at the shelter, he found who he was.  He credits his father and Ottawa Pads staff for never giving up on him.  “One day it just clicked, and I remembered that I was told that I was worth something, that I could do it and most importantly, no one was going to do it for me. I remembered the life skills classes I attended teaching me about Job Seeking, Money Management, and Reflections, a self -study for soft skill employers are looking for. I remembered the hours my father and the shelter staff had listened to me and gave me encouragement and direction. I began to understand my mistakes and made plans to change it. It was hard, but I just took small steps one at a time.”

Currently at 40 years old, Tim is so proud that he is paying for his own housing now, purchasing his own cell phone and clothing. As he sits with us, he just beams with pride for himself. And this new self-esteem seems to help him manage his stuttering. He returned this year volunteering the nights he did not work. He served meals, put away donations and assisted in checking clients in while talking to each one. He spent time asking about their day. He offered them the same advice that he had received repeatedly. “You are worth something and you can do it.” He told them not to wait for eight years like he did. “Do not waste your life and time. Believe in yourself. No one will do it for you. Break off the goals in pieces that are manageable, meet it and shoot for the next one.”

We share with excitement, that Tim’s new approach to life is doing well for him. It seems like a miracle and all miracles are great events. Tim has since moved on to mend a past relationship and has a job with a better salary. He came in the last night before he left for his train. While he was there, he volunteered. He hugged us all goodbye and had pictures taken with us. His parting words were, “If I can do it, anyone can.”

“We are grateful for the opportunity to be part of Tim’s journey and will continue to support his progress. He shared that he will never forget us. It is inspiring that when it seems like a failure in so many ways, that words, care and the hand up most definitely makes a difference.” Carol Alcorn.